Mission:   Promote athletics in our community and give our athletes, boys and girls, the necessary skills to practice this sport.

History:   In the summer of 2018, the Socrates-Demosthenes School formalizes the creation of the Areus athletics club and obtains its official affiliation to the FQA. Areus starts its operations for the 2018-2019 season with 3 students from its secondary program. The image and slogan of our team “United, to the end! Reflect our historical heritage and the values of our School and our community.

Training and competitions:    Training sessions are held twice a week.  Athletes are entitled to physical preparation and technical instruction in the disciplines they have chosen to prepare them for the competitions of the season.

Stay tuned for more information on our evolution and our upcoming results! 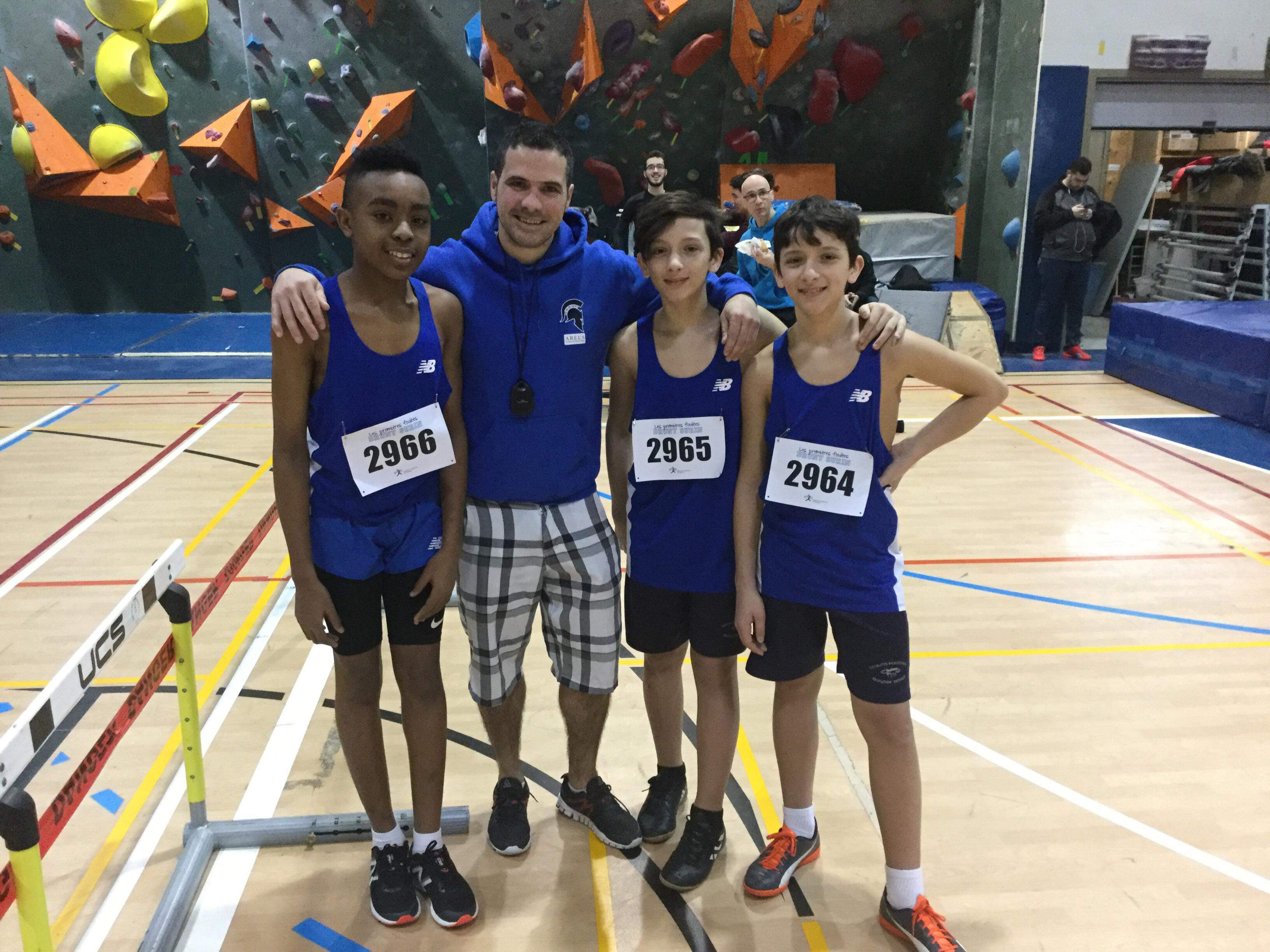 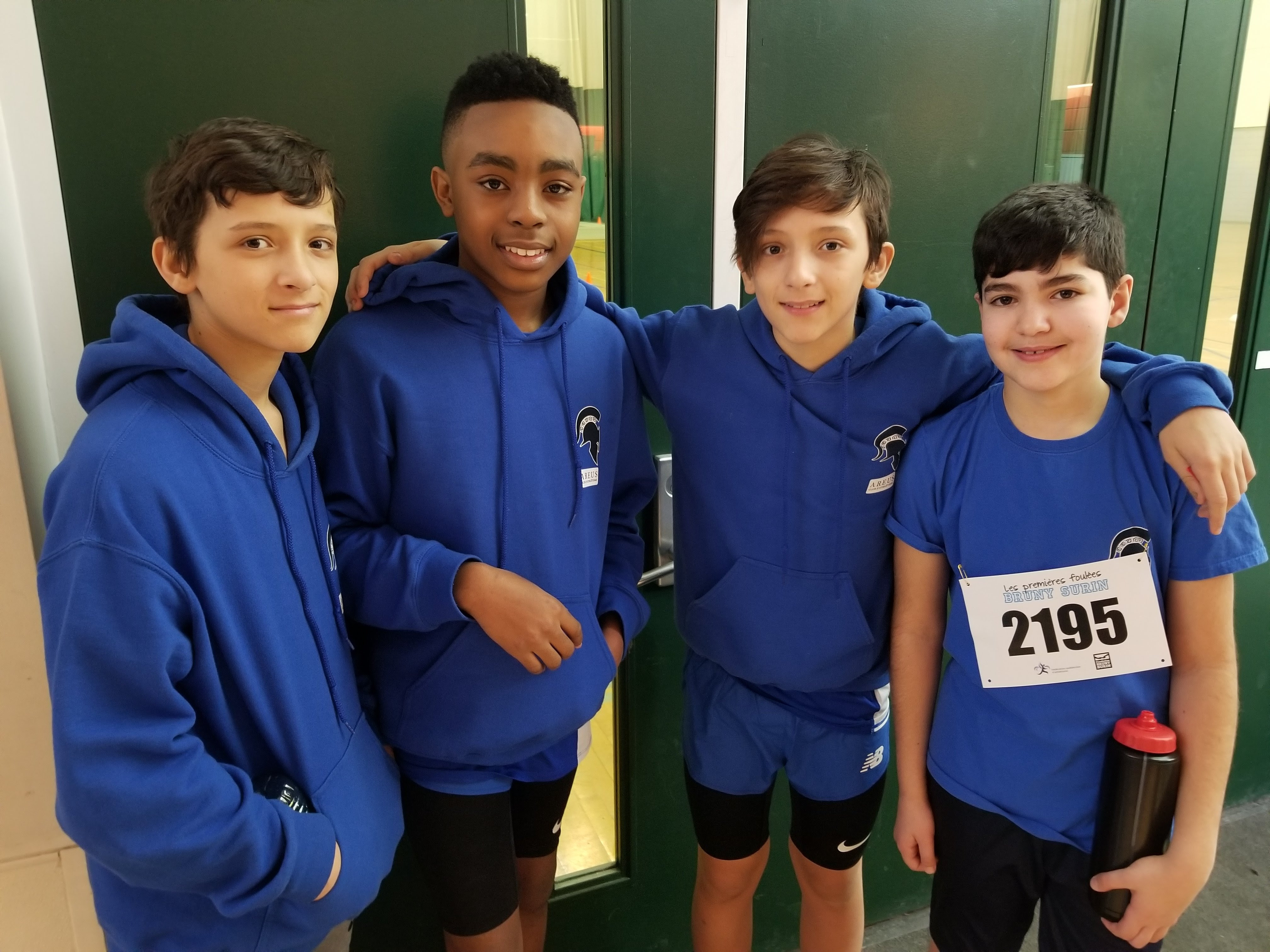 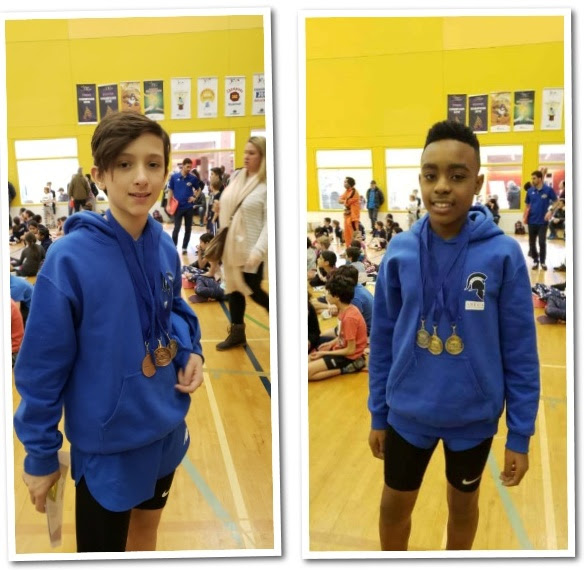 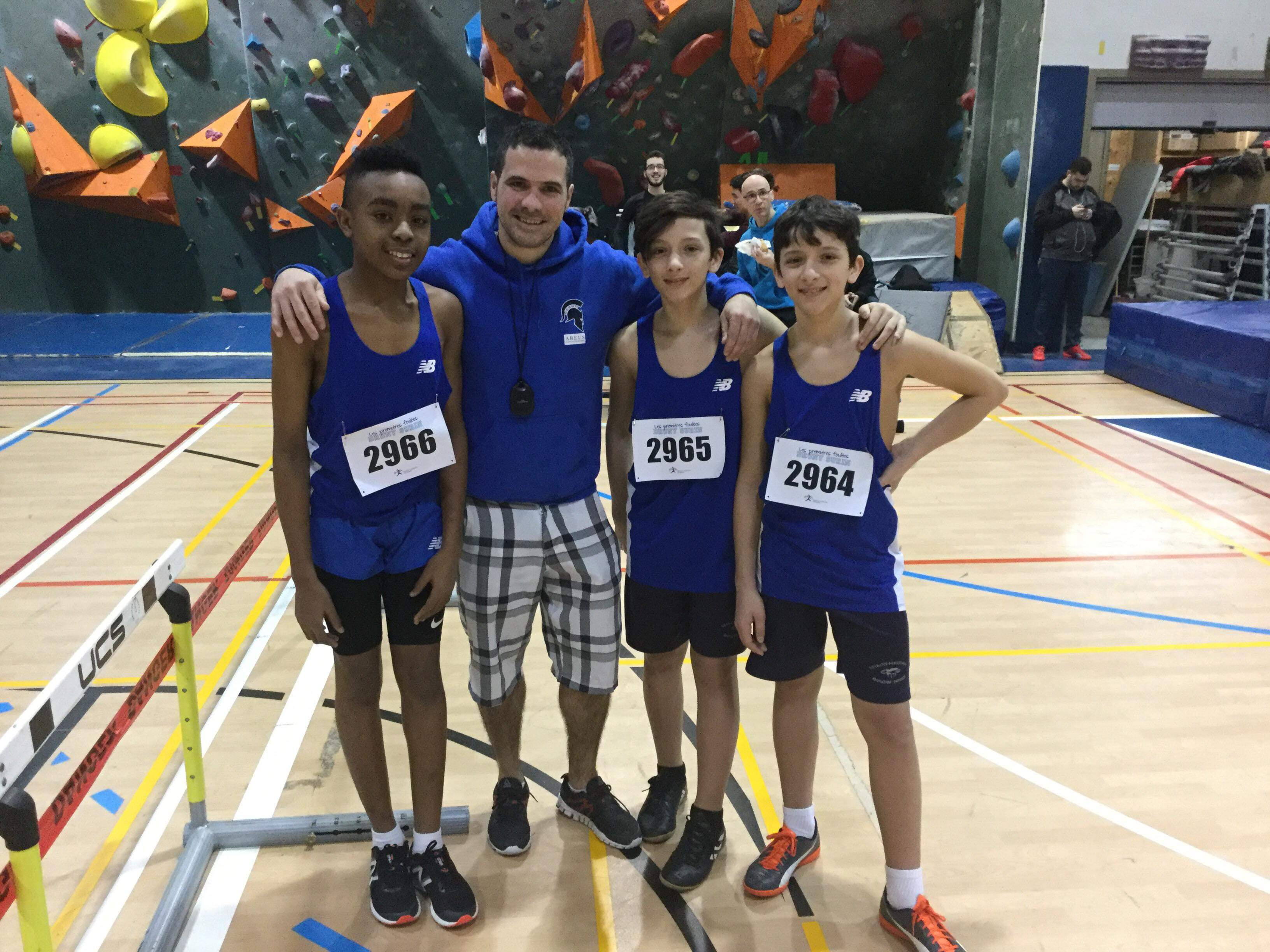 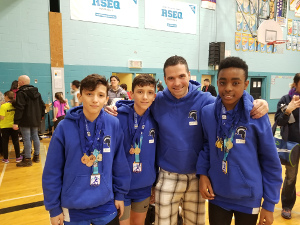 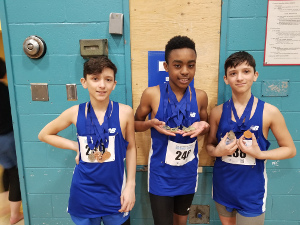 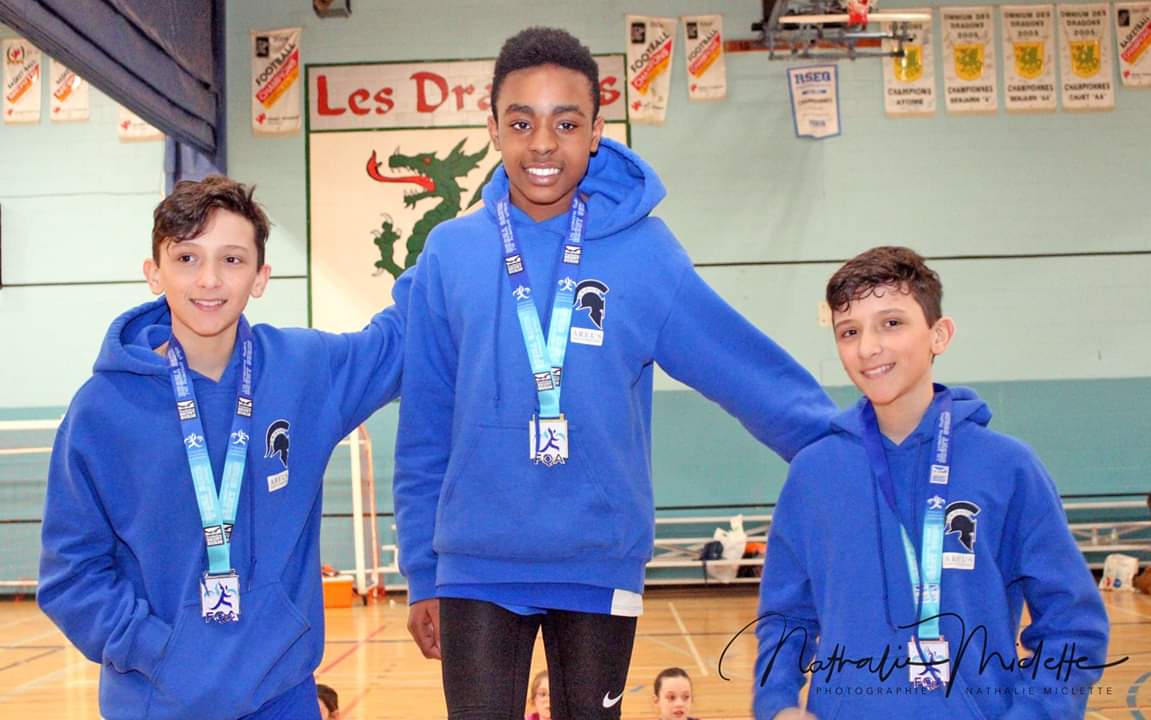 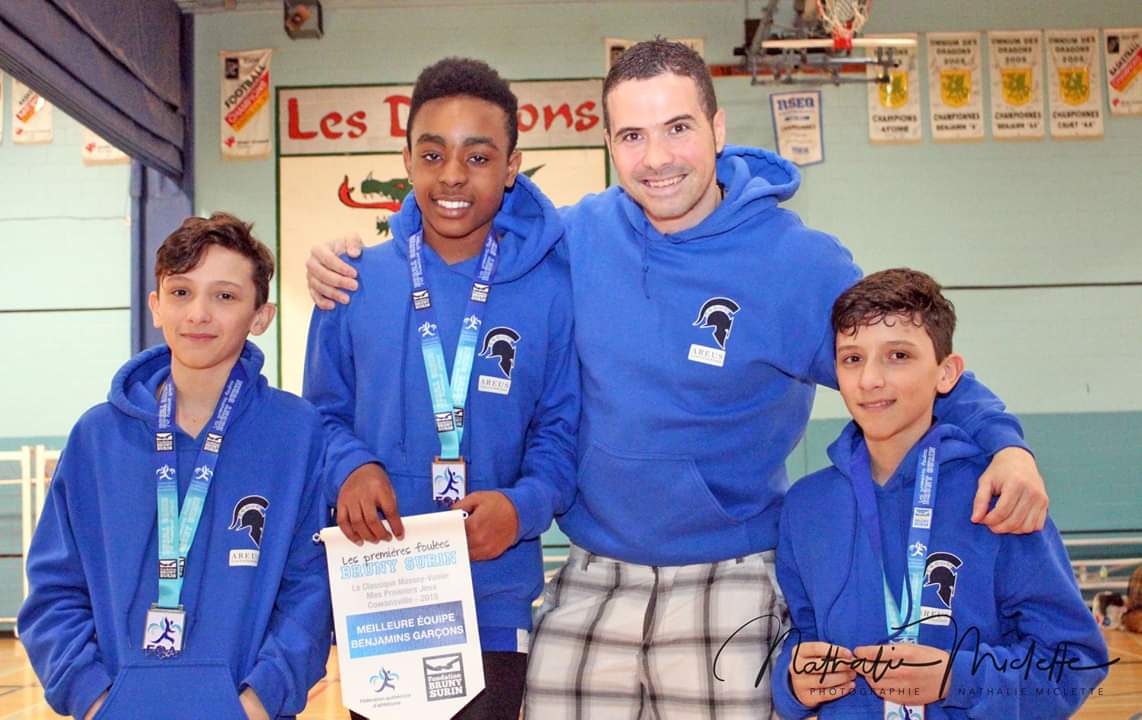 At the games of Lachine. 35 athletes from several established clubs. It’s a pentathlon of 5 disciplines and here are our results.

Athletics: Club Areus of the Socrates-Demosthenes School wins 5 podiums in a historic start!

Lachine- On Sunday, January 27th, the Socrates-Demosthène School’s Areus Athletics Club took part in the Lachine Games, a competition of the Quebec Athletics Federation (FQA). This was the very first competition in the history of our athletics team!
Three athletes from the club participated: Nasir Pierre, Anthony Papai and Liam Papai also students at the Socrates-Demosthenes School.

5 events were on the program for the category of our athletes is Benjamin male. Sprint, long jump, shot put, 25m hurdles and high jump.
First off, in the sprint event, Nasir Pierre won the silver medal after having obtained the 2nd best time in qualifying. Our 3 athletes finish in the top 10.
Then, in the long jump, Nasir Pierre finishes 2nd while Liam Papai nears the podium with 4th place.

In the shot put, the club Areus really attracted all eyes. Nasir Pierre wins gold with a projection of 8m50. A personal best for him. Then, Anthony Papai wins the bronze with an 8m11 throw. Liam Papai finishes with a throw of 7m96. Our 3 athletes are in the top 4 positions! What an exploit!

Finally, at the combined pentathlon of all events, Nasir Pierre deserves the silver medal.

It was a very successful day for our athletes and their coach, Eric Bouchard, who will be competing again on February 16th. The future looks promising!

Saturday, February 16 at Notre-Dame-de-Grâce, in Montreal, was the second competition in the history of the athletics club Areus of Socrates-Demosthenes High School, which was sanctioned by the Québec Federation of Athletics. Athletics (FQA). Twenty athletes lined up to clinch the top spot on the podium for the four events of the competition.

This is an excellent performance for the team members. In addition, after winning the event with a jump of 1m36, our athlete Nasir Pierre continued to raise the bar under the encouragement of the crowd of a hundred people, who appreciated. Nasir Pierre won the gold and set a personal best of 1m42. You can see it in action by clicking here.

Liam Papai, who specializes in the long jump in training, took the gold medal with a jump of more than 40 centimeters from his closest pursuer. Significant fact: our 4 athletes rank in the top 10!

Many congratulations to our athletes and their coach!

Athletics competition in Cowansville: 14 medals for Areus from École Socrates-Démosthène

Cowansville- On March 16th, the 3rd athletics competition of the Athletics Team Areus of the Socrates-Demosthène school took place. This competition was sanctioned by the Quebec Federation of Athletics (FQA). The competition featured a pentathlon of 5 events: High jump, Hurdle race, Sprint, Shot put and 800 meters. It was a great opportunity for our team to continue our successful streak of previous competitions.

Here are the results for our athletes:

Like the previous competition, Nasir Pierre continued to raise the bar under the encouragement of the crowd present after winning the high jump event. Two highlights. 1st medal in high jump for Liam Papai and our 3 athletes present rank in the top 5.

Nasir Pierre, sprint and high jump specialist, reached the top step of the podium with a time under 8 seconds (7.94). Liam Papai wins bronze with a time of 8.26. Highlight: Our 3 athletes rank in the top 4.

A triplet! Having finished first in their respective wave, our 3 athletes clinch the 3 medals of the event. Nasir Pierre won easily with a time of 6.39 seconds. Liam Papai gets the second time with 6.59 seconds and Anthony Papai concludes the tripled Areus with a time of 6.76 seconds.

2nd hat of the day! First, Nasir Pierre made a powerful projection of 9m36 to ensure the 1st place. This is a personal best for Nasir. Anthony Papai equalizes his personal best of 9m20 and takes the second position. Liam Papai then ensured the tripling of Areus by projecting the weight at 7m95.

Liam Papai wins the gold medal with a time of 2m53. Nasir Pierre gets a time of 2m55 and Anthony Papai stops the clock at 2m57.Clair: Our 3 athletes are in the top 10.

3 triplets! This is an extremely rare feat. The announcer of the competition has also exclaimed: “Ladies and gentlemen, we are witnessing a tripling!” To the applause of the spectators.

To top it off, the organizers said Areus of Socrates-Demosthène school, the best team of the competition!

Our team attracts attention and gets a lot of success! Congratulations to the athletes and their coach Eric Bouchard.

Athletics Club Areus from Socrates-Demosthène School: United, to the end!